BET Celebrates and Pays Tribute to Ambassador Dr. Bobby Jones As He Announces His Retirement from “Bobby Jones Gospel”

It was 35 years ago when Dr. Bobby Jones was introduced to the world of Gospel through the premiere of “Bobby Jones Gospel” on Black Entertainment Television in 1980.

Since that initial partnership which helped established BET to get off the ground, “Bobby Jones Gospel” has become the longest continuously running original series on cable television as well as all other networks.  Dr. Jones served as the host and executive producer.

In 1986, Jones also produced the show “Video Gospel” which premiered on BET.  As if that wasn’t enough Dr. Jones went on to produce and host a number of shows, including The Word Television Network’s, “Bobby Jones Gospel Classics”,  “Bobby Jones Presents”, “The BET Gospel Network’s”,  “Let’s Talk Gospel”, “The Gospel Channel’s “Gospel Vignettes” and Bobby Jones Next Generation.

Dr. Jones has toured with the Musical Group, New Life over seas, along with the Nashville Super Choir and for twenty-four years he hosted “The Dr. Bobby Jones International Gospel Industry Retreat.” Most recently, Dr. Jones has opened his own production Studio in Nashville and is an instructor at Nova Southeastern University.

However 35 years is a long time to constantly stay busy producing shows, cutting tape, on stage, in front of cameras or behind the microphone when you are about to turn 78 years old. So now after fulfilling God’s commission, Dr. Bobby Jones is stepping away from the BET Sunday Morning Gospel platform to retire.  He even organized an exit strategy that would dictate his final taped shows for BET and his special guests including Kirk Franklin, Vickie Winans, LeAndria Johnson, Dottie Peoples, Dorothy Norwood, Melvin Williams, Earnest Pugh, Rance Allen, Minister Earl Bynum, Bishop Hezekiah Walker, Richard Smallwood and a long list of others.

As apart of this weekend of closure it was on Sunday afternoon when the final curtain was drawn and the last show was taped for “Bobby Jones Jones,” with Kirk Franklin co-hosting.

To celebrate this bitter sweet moment an Invitation Only celebratory dinner was held in honor of Dr. Jones at the Mayflower Hotel in the heart of our Nations Capital in Washington, D.C. on Sunday evening.

The evening was hosted by Vickie Winans. Performances were given by Y’Anna Crawley who was simply breathtaking and the Nashville Super Choir who delivered the final performance. 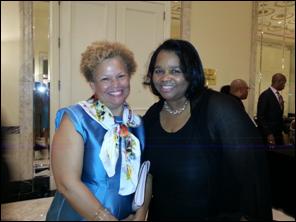 Tributes were delivered by Chairman & CEO Debra Lee, Mr. Stephen Hill, Ms. Xernona Clayton and Isaac Carree.  A surprising tribute was also given by Pastor Donnie McClurkin, who made a special trip to be there.  He talked about their long time rocky friendship until he (McClurkin) decided to put aside his differences and accept Dr. Bobby Jones for the kind man that he is. His comments were met with applause across the entire Ballroom.

A video presentation was also shown and included a clip from the founder of BET, Bob Johnson, who said, “When we started BET we were only on the air for two hours, Friday and Saturday nights.”  While looking for content and programming Mr. Johnson said, “Someone sent me a copy of a show that Dr. Bobby Jones was doing at the time and when I saw it, I realized at that moment that Bobby Jones is exactly what we needed.”  He went on to say,

when we went on the air, I wouldn’t be sitting here as the founder of BET.”

The same words could also be shared by thousands of others who Dr. Jones allowed to have stage time at BET. >From established artists to independent newcomers, Dr. Jones has truly given many an opportunity to share their gifts and talents to the world unlike any other host on television.

But now comes an even bigger question.  As Dr. Jones steps away from such a large platform, the question now being asked throughout the industry is “Where will Gospel artists, Young and Old, be able to go and sing with a platform and stage as large as the one given to them through Bobby Jones Gospel?”  Additionally what is next for Dr. Bobby Jones?

We must all realize, Dr. Bobby Jones is only one man, and while he has carried the load in how we see, experience and participate in Gospel music on a large scale, from the heartland of America to the shores of South Africa it is now time for all of us to pick up the Gospel mantel and move forward.

So as we push forward, we must all remember we all have a responsibility to keep Gospel music alive and on a large stage.

Zandrea why you put the choir on blast like that t

Congratulations to @karimatrotter, who lands at #